III
Yesterday, someone said I was a cynic, that I was a pessimist and a cynic. I think he meant to say that I was a sad, old bastard but wanted to be kind. I don’t think I’m that bad. After all I like children… Well, I don’t really know any children but there’s one next door. His mother thinks I’m wonderful: “because Mr. Dunloe is a member of the orchestra, don’t you know?” So she bought the boy a violin, a cheap, squeaky thing with hardly a note anywhere in it, and she makes him play it. I love listening to him in the evenings. It’s beautiful… He’s terrible at it. No gift for imitation, the child is destined to be original. So many mistakes, but each one is uniquely his own. I encourage him and encourage his mother to encourage him. “If he ever joins the orchestra, he’ll be a sensation,” I bellow from my sitting-room window. Then I go back to my footballers. I think I’ll buy him a football. I hate to see so much originality wasted. I’d hate him to end up like me. Sometimes I cry when I see his mother marching him off to his music teacher. She reminds me of my mother. She’s so proud! As I wipe my tears away with a tangled handkerchief, I pray to God that her son will disappoint her. It’s not malice. It’s him I’m thinking of… Life is too precious. You don’t want to spend it being someone else’s hired musician. It’s not interesting, it’s just not interesting!
I have a picture of Maria in a picture-frame by my bed and a picture of my mother too. I light a candle sometimes on the bedside table as if it was some kind of altar decorated with images, and I stand a vase with some artificial flowers up in the middle of it. I stay perfectly still and silent. I suppose it’a a sort of prayer… I loved Maria. I love her still. I loved my mother. I love her still. When the candle-flame is glowing golden between the two of them like that I feel at peace. I feel life wasn’t all bad, it wasn’t all Ludwig B., there was bright Maria, who when she moved was like light moving… The fragile light of dreams moving through my life. I’m thankful. Two women loved me. Two women… You couldn’t put that into music, you never could. And I lost them. The naked truth is that when I lost them I lost everything. I lost everything, love, music, self, everything… I understand the naked truth now. Without love, you have no music, you have nothing. Two women loved me in my life, that’s all, and that’s the naked truth. And since they died, I’ve had, I’ve been nothing other than a black bundle of greif holding my emptiness to myself. Good God, was I lucky? Or was I the unluckiest man who ever lived? If only my mother had never bought me that violin for my sixth birthday… If only I’d never heard the name Ludwig… I would have escaped a life in music.
After thirty-six years of grieving and hating myself perhaps it’s time to stop. You get tired, even of the most intense grief, you want to let it go. If only life had been bigger and brighter for me… But why wonder? You take your place in the ranks of the orchestra and play on. Life goes on always. You play your fiddle even if Rome burns. In the summer you get to go on holiday. You get to laze by the Mediterranean if you’re lucky. You come back with a sun tan. And you play on… You play on. No matter how hurt you feel, you play on. And you try not to even think, for a second, that the orchestra is naked. If you can help it…
Always, before a rehearsal or a performance I inspect myself in the dressing room mirror. I have to make sure that I am immaculate in every way. I straighten my jacket over the stiff white of my shirt and waistcoast and adjust the black bow-tie which is my only concession to style. My face I can do nothing about, the wrinkles persist and deepen, my eyebrows frown greyly, my colorless eyes and lips address the world in a lacklustre, bloodless manner. “William Dunloe,” I say my name like a schoolmaster recalling a dead child from the mists of time, and see myself approaching, black-clad, sad but dignified looking, ready to take my place in the naked orchestra. Ready to expose my grief at the funeral.
In our mourning black we parade on stage like guests at an undertakers’ ball. The crowd gasps with fear, or so it seems to me, when they see us, as if we were ghosts emerging from an open grave. “Like a convention of widows and widowers,” someone jokes. “Beethoven’s widows and widowers,” I say quite seriously. We take our seats and wait for the conductor to arrive. Before he comes we peddle a few fretful notes to fill the anxious waiting. Over my taut bow I eye, with an apparantly distracted eye, my colleagues sitting in their black folds like so many crows in a field. We punish the ten minutes waiting for the conductor with some woefully discordant tuning of instruments. Then he comes, floating to the podium, rubbing his hands in a businesslike way. He holds his hands aloft over the score of the “Pastoral”. There comes the most delicate of pauses. I breathe deeply waiting for the guillotine of his hand to fall. And then it falls! And then I play! I play! My life, after all, is music! 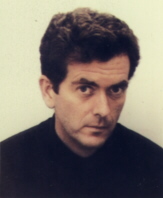